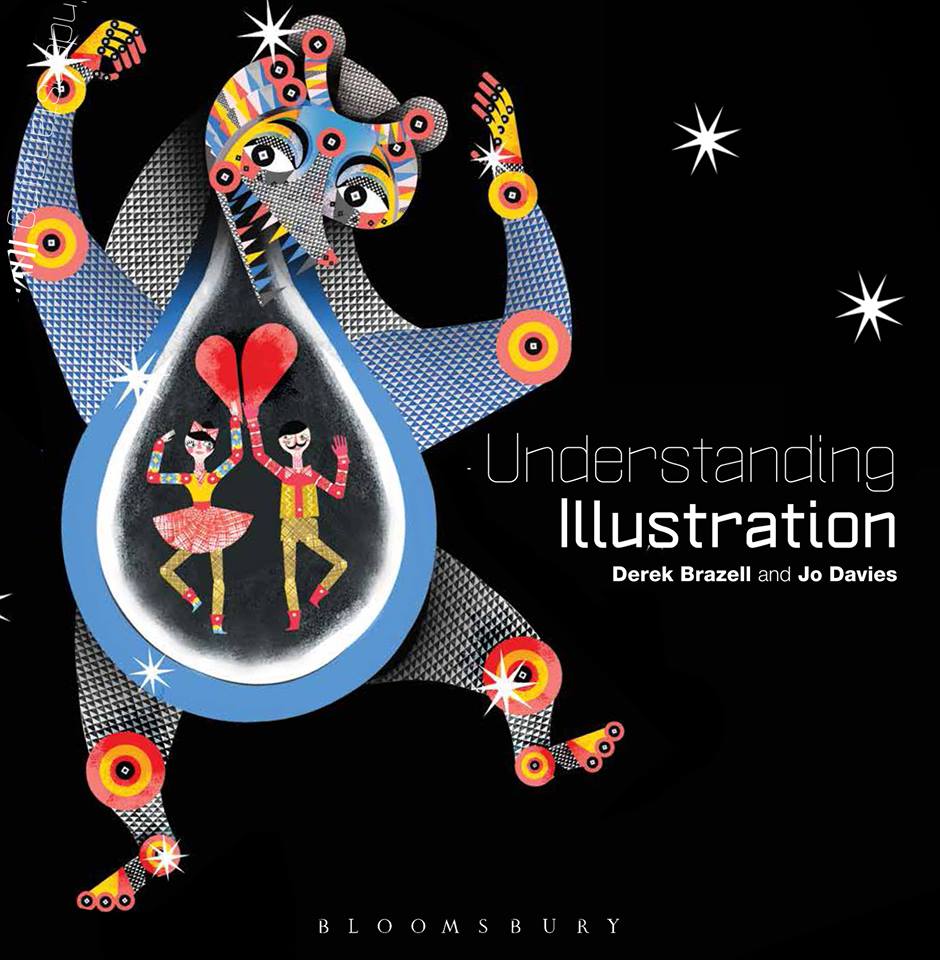 Edu Fuentes is a Spanish-born illustrator, currently based in London. He studied Photography and Illustration at The School of Art and Design, and have been working as a freelancer since 2004.

“I chose these three Hawaiian birds because of their colourful plumage and because I wanted to portray their habitats and the reason for their destruction – disease carried by mosquitoes, agriculture, predation by cats and rats, pineapple plantations and the introduction of grazing mammals. I made a high-quality limited edition of 20 prints for each image.” 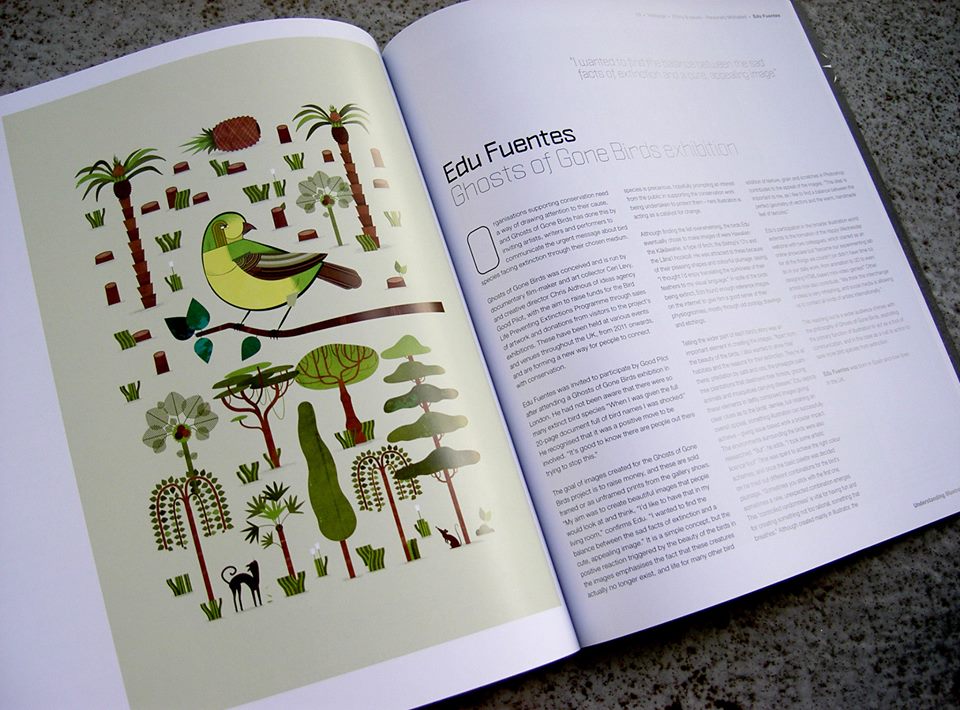 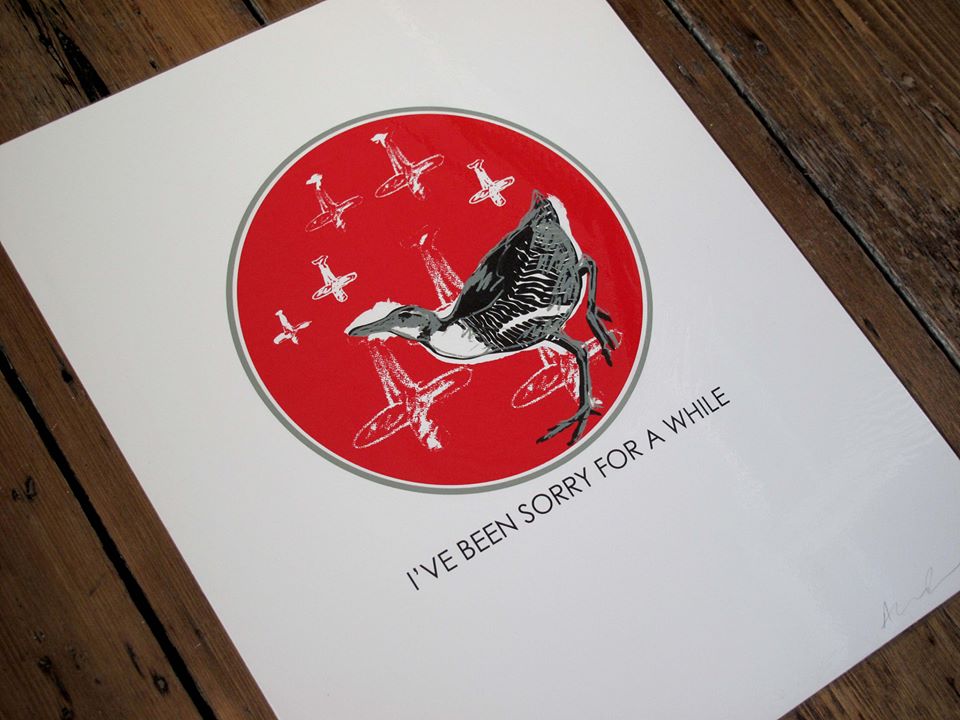 The beauty of Ghosts? that you often find such different artists sitting comfortably alongside one another: so here’s another two limited edition prints we have to offer from the wonderful Dafila Scott and the very talented Mr Adam Bridgland…

Dafila Scott trained as a zoologist and spent the first part of her career studying Bewick’s swans and other waterfowl. After her research career, she turned to drawing and painting and now works as an artist.

Most of her work is inspired by wildlife and landscape and features animals or places with which she has become familiar. As a member of the Society of Wildlife Artists, she has exhibited regularly at their annual exhibition at the Mall Galleries as well as at regional shows and at other galleries. She has also illustrated books and articles.

Her work includes both figurative wildlife paintings and abstract landscapes inspired by visits to Wales and to the South African Kalahari. However, she is equally happy to gain inspiration at home in the garden or on the surrounding fenland. In February 2011 she spent a month as artist in residence sponsored by the Friends of the Scott Polar Research Institute on the Royal Navy’s Ice Patrol Vessel HMS Scott in the Antarctic and has spent time recently working from drawings and memories of this trip.

Adam Bridgland, A graduate of the Royal College of Art, Adam Bridgland has shown widely both in the UK and Internationally, recently at the London Art Fair, and as part of the Courtauld Institute of Art’s East Wing Project. Adam states of his work; “Much of the subject matter for my work is taken from the everyday world. They are often pieces that have a heavy leaning towards ‘Englishness’ or kitsch” His work is held in many public and private collections, including those of the V&A, UBS, Boeing and Debbie Harry. 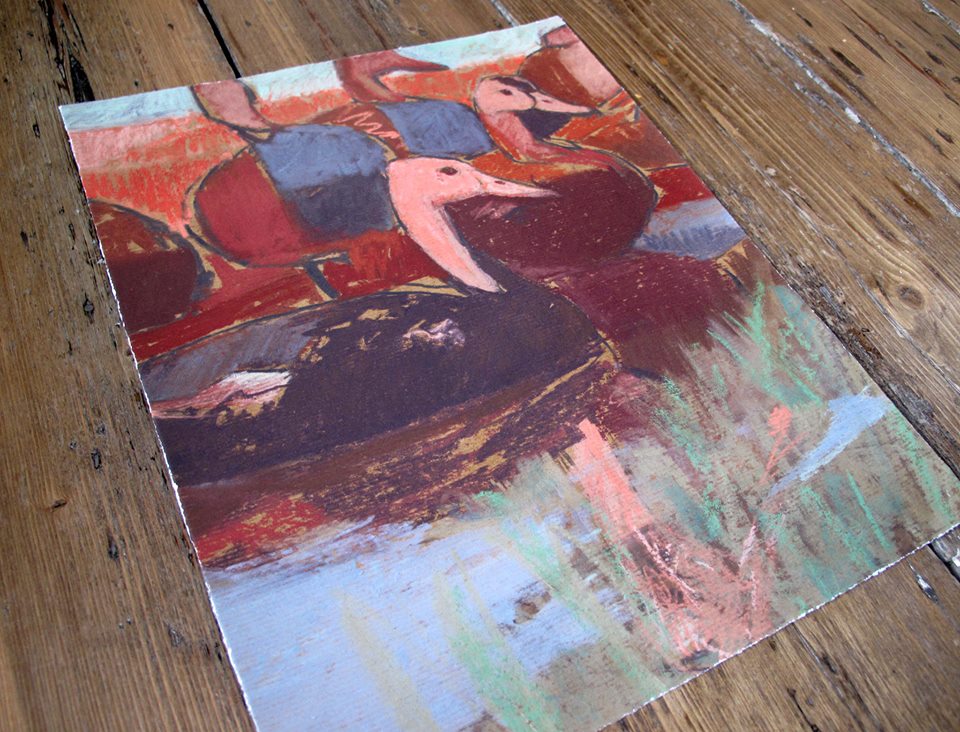 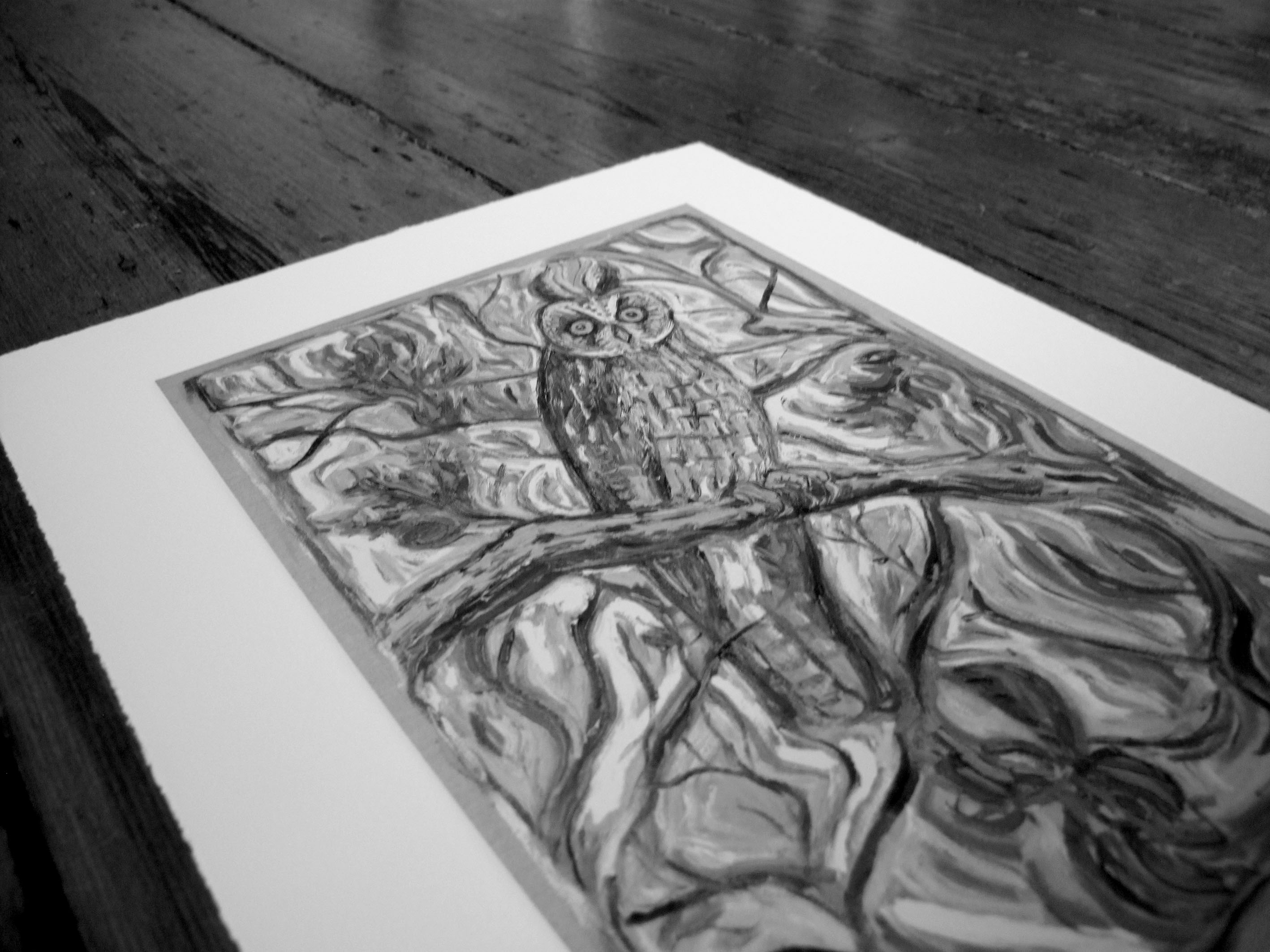 Limited edition signed print by the wonderful Mr Billy Childish of the much missed Laughing Owl. Put it on your wall and feel its eyes follow you around the room…

for more details check out : http://ghostsofgonebirds.goodsie.com/

Since 1977 Billy Chyldish has released over 150 independent LP’s, published 5 novels and over 45 collections of poetry, but his main job is painting. He has had solo and group exhibitions internationally including New York, London, Seoul and Berlin. He was included in British Art Show 5, which toured throughout four cities – Edinburgh, Southampton, Cardiff, and Birmingham. In 2010, he was the subject of major concurrent survey exhibitions at the ICA in London and White Columns in New York, and in 2011 he became Artist in Residence at the Chatham Historic Dockyard where he currently works. 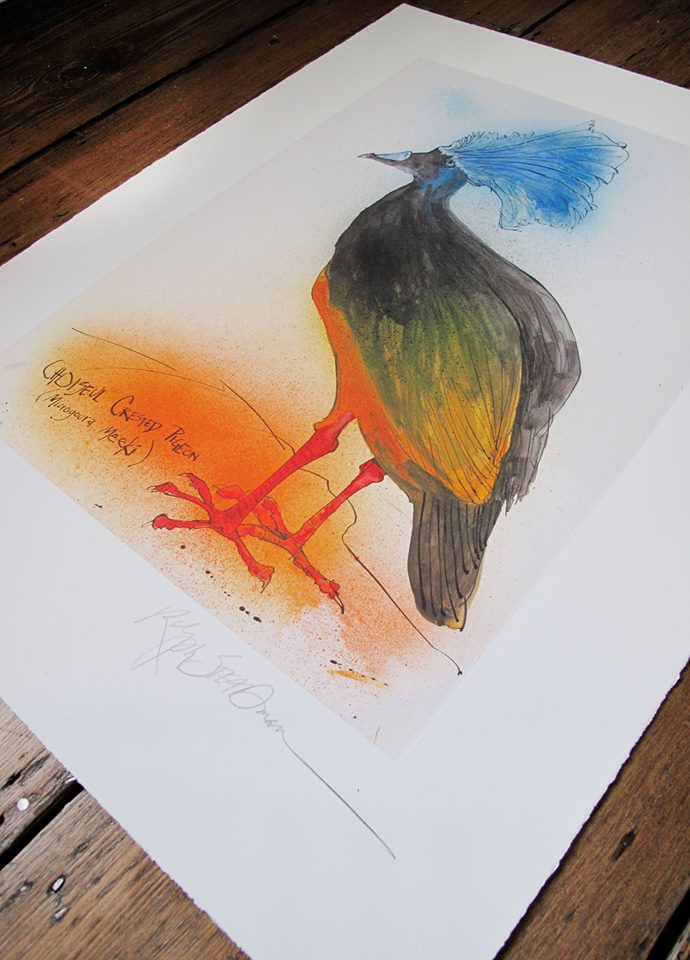 is your life missing a Gone Boid?

Then don’t despair – we still have some of the wonderful Ralph Steadman creations available in the refreshed and re-stocked Ghosts print shop.

Steadman is renowned for his political and social caricatures, cartoons and picture books. Awards that he has won for his work include the Francis Williams Book Illustration Award for Alice in Wonderland, the American Society of Illustrators’ Certificate of Merit, the W H Smith Illustration Award for I Leonardo, the Dutch Silver Paintbrush Award for Inspector Mouse, the Italian Critica in Erba Prize for That’s My Dad, the BBC Design Award for postage stamps, the Black Humour Award in France, and several Designers and Art Directors Association Awards. He was voted Illustrator of the Year by the American Institute of Graphic Arts in 1979.

Steadman had a long partnership with the American journalist Hunter S. Thompson, drawing pictures for several of his articles and books. He accompanied Thompson to the Kentucky Derby for an article for the magazineScanlan’s, to the Honolulu Marathon for the magazine Running, and illustrated both Fear and Loathing in Las Vegasand Fear and Loathing on the Campaign Trail ’72. Much of Steadman’s artwork revolves around Raoul Duke-style caricatures of Thompson: bucket hats, cigarette holder and aviator sunglasses.

Steadman appears on the second disc of the Criterion Collection Fear and Loathing in Las Vegas DVD set, in a documentary called Fear and Loathing in Gonzovision, which was made by the BBC in 1978, of Thompson planning the tower and cannon that his ashes were later blasted out of. The cannon was atop a 153-ft. tower of Thompson’s fist gripping a peyote button; Thompson demands that Steadman gives the fist two thumbs, “Right now.”

As well as writing and illustrating his own books and Thompson’s, Steadman has worked with writers including Ted Hughes, Adrian Mitchell and Brian Patten, and also illustrated editions of Alice in Wonderland, Treasure Island, Animal Farm, the English translation of Flann O’Brien’s Gaelic-language classic The Poor Mouth, and most recently, Fahrenheit 451.

Among the British public, Steadman is well known for his illustrations for the catalogues of the off-licence chain Oddbins and he designed a set of four British postage stamps to commemorate the appearance of Halley’s Comet in 1985. He also designed the labels for Flying Dog beer and Cardinal “Spiced” Zin’ wine, which was banned in Ohio for Steadman’s “disturbing” interpretation of a Catholic cardinal on its label.

In 2011, Steadman began running prose and poetry in Kotori Magazine.

He also contributed to the BirdLife International’s Preventing Extinctions programme with an image of critically endangered Northern Bald Ibis. 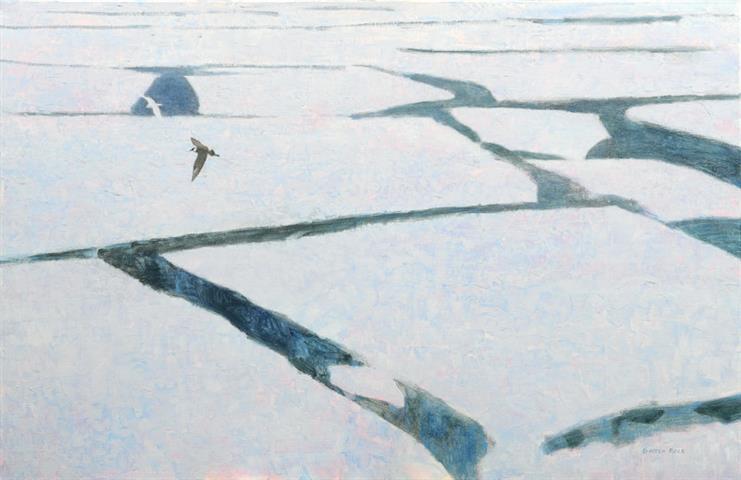 Our friend Darren Rees, who contributed an amazing piece to the Ghosts of Gone Birds Show in London back in November 2011, is part of a new show.
It’s in the Slimbridge Wetland Centre, starting 24th of November 2013 to the 13th of January 2013.
Go and have a look if you can.
His Ghosts piece will be there amongst some of his other great works. 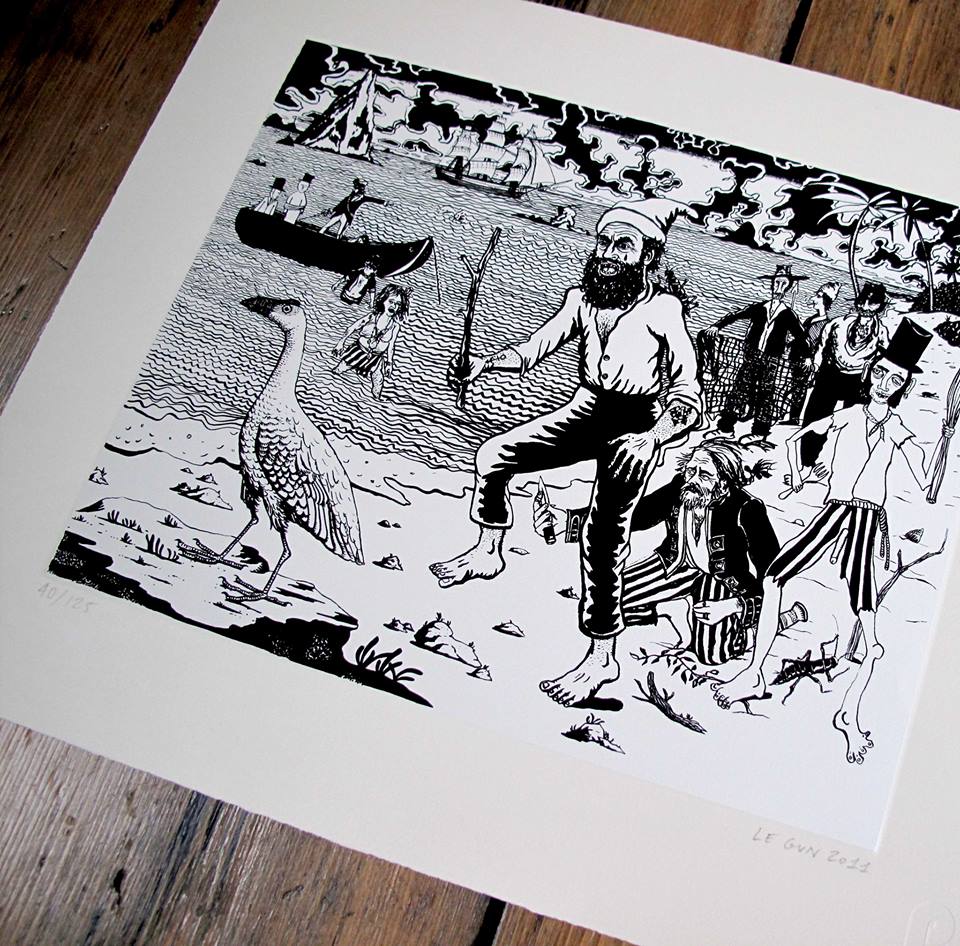 Le Gun’s limited edition print of The Tragic Demise of the White Gallinule may not be the most festive topic, but is a great Ghosts piece if you want a poignant reminder of the project for your wall. Just check out the refreshed print shop for details.

We’ve just given the Ghosts print shop a nice refresh and restock so check out the latest selection of limited edition pieces available to order online with guaranteed delivery. http://ghostsofgonebirds.goodsie.com/